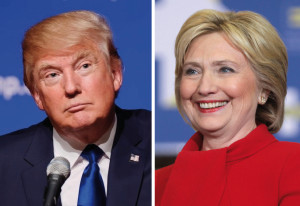 SAN FRANCISCO, Calif. – June 6, 2016 – According to a new EngagementIQ ™™ study conducted by Logica Research , if the Presidential election were held today, Hillary Clinton would defeat Donald Trump by just 3 percentage points (39% to 36%), a statistical dead heat. A Koski survey of 1,002 Americans from May 31 – June 1, 2016, also shows that in a matchup between Democrat Bernie Sanders and presumptive Republican nominee Donald Trump, Sanders would defeat Trump by 14 percentage points (47% to 33%). Twenty percent or more of Americans in this survey say they will not vote for either candidate in Trump vs. Clinton (21%) or Trump vs. Sanders (16%) scenarios, or that they will not vote at all (4%).

These findings are part of a proprietary, semi-annual EngagementIQ ™ (EIQ) study by Logica Research that examines brands, celebrities and politicians in order to identify specific positive and negative attributes that drive consumer (and voter) behavior. Logica's EIQ seeks to test new research theories and learn more about four measures of interest and willingness to engage, including:

EngagementIQ ™ results are expressed in terms of positive or negative rankings, with a higher positive score indicating that the public has a greater degree of connection with the subject. Tracking people and brands since 2014, Logica's new EIQ data offers further insight into today’s political landscape, including:

The data illustrate that performing well in emotion- or behavior-based metrics can drive engagement and action – but that the Holy Grail in terms of making the cash register ring or getting votes – is for brands or candidates to meet both practical and emotional needs. Achieving this delicate balance is something that politicians appear to have difficulty with, especially when compared to beloved celebrities or favorite brands. For example, the all-time EngagementIQ ™ leader among people in the news is Ellen DeGeneres, with a positive score of 46.1, more than doubling President Obama’s EIQ rating.

“This year’s race for President is a compelling spectacle, and our framework shows that Americans’ emotional engagement with political figures is important in their voting behavior,” commented Lilah Koski, Founder and CEO of Logica Research . “Our EngagementIQ ™ was designed to advance industry dialogue around brand engagement. Our examination of the candidates shows that, as with brands, people base decisions on a combination of emotional and practical needs. What works in the marketplace, works in the voting booth.”

As part of exploring the intersection of behavior and emotion for the EIQ, Logica Research also probed voter feelings associated with key political figures, including joy, excitement, trust, sadness, fear and betrayal. Notable results include:

Despite Donald Trump’s largely unfavorable ratings on fear and trust, nearly a third (31%) of Americans say they would prefer to sit next to him on a long economy class airplane ride, versus the other politicians in the survey. Trump is virtually tied with President Obama, at 30%. Hillary Clinton and Bernie Sanders were seen as less desirable seat mates, with only 24% wanting to sit with Bernie, while Hillary came in at only 13% as a flight buddy.

“In a close race like this, a voter’s gut feeling can make all the difference,” continued Koski. “A candidate’s ability to engage with voters on an emotional level is likely to make a big difference between getting those voters to the polls to support their candidate, versus just staying at home on Election Day. When it comes to the presumptive candidates for the November election, the question is whether Trump’s perceived arrogance and the feeling of fear he engenders are bigger liabilities than Clinton’s perceived dishonesty and feeling of betrayal.”

The Logica Research EngagementIQ ™™ survey was conducted using an online panel between May 31 and June 1. The survey consisted of 1,002 respondents. Quotas were established to ensure that the survey demographics represented the demographics of the U.S. population on age and gender.  The margin of error is +/- three percentage points. The study was designed and sponsored by Logica Research .

About the Logica Research EngagementIQ ™™

The EngagementIQ ™™ provides insight into how the public engages with companies based on positive and negative sentiment, positioning in the news and in social media. This proprietary measurement system includes three behaviors and six emotion-based attributes.  For more about the Logica Research EngagementIQ ™™ visit https://logicaresearch.com/insights/#engage.